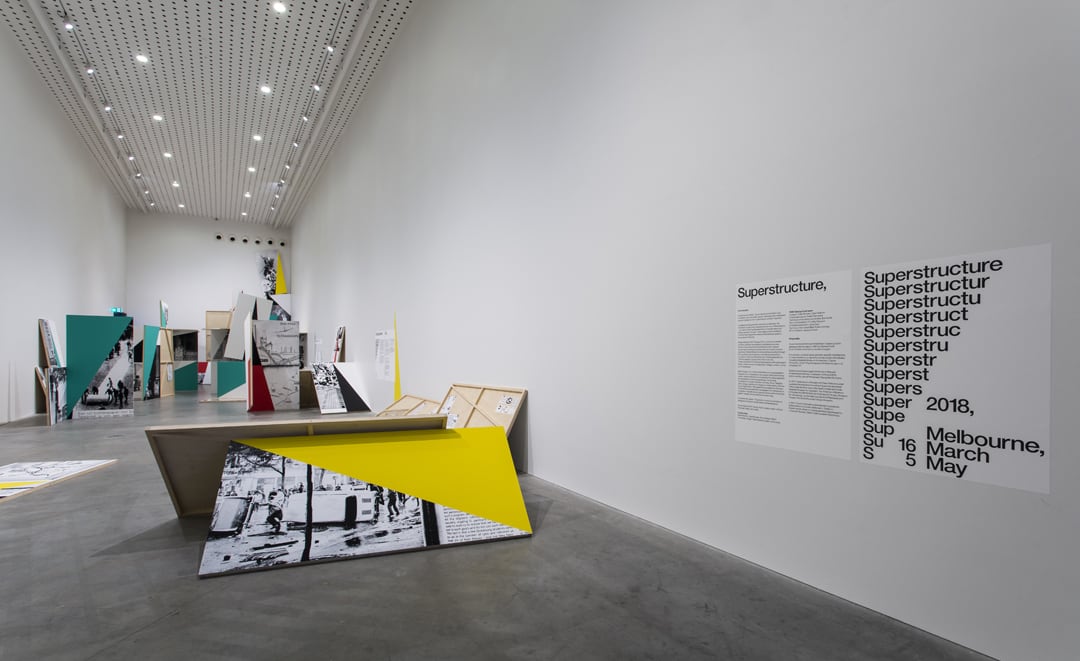 For Superstructure, Experimental Jetset identified key sub-cultural movements that had inspired their practice. These moments in time would be layered with existing and newly-created works including film, collage, posters, prints and installations.

The exhibition was conceived as a journey through four quarters of an imaginary city representing four conditions: The Constructivist City, The Situationist City, The Provotarian City and the Post-Punk City.

The exhibition placed Experimental Jetset and their ideas-driven and socially-engaged practice within a historical continuum.

As they explained: ‘Invited by RMIT Design Hub Gallery and the NGV to put together a retrospective show on the topic of our own work, we decided to somewhat broaden the theme, and seize this opportunity to turn the exhibition into a personal research project – a chance to look deeper into some of the themes that we find relevant to our own practice’.

In addition, a sequence of newspapers would be published in collaboration with nine Melbourne-based graphic designers to connect the ideas within the show to the local context. The themes explored in the newspapers would also form the basis for a program of public events, giving visitors critical insight into graphic design discourse today. The nine practitioners were: Paul Marcus Fuog, Stuart Geddes, Jenny Grigg, Lisa Grocott, Hope Lumsden-Barry, Warren Taylor, Ziga Testen, Michaela Webb and Beaziyt Worcou.

Experimental Jetset is an Amsterdam-based graphic design studio founded in 1997 by Marieke Stolk, Erwin Brinkers and Danny van den Dungen. Focusing on printed matter and site-specific installations, EJ has worked on projects for a wide variety of institutes, including Stedelijk Museum Amsterdam, Centre Pompidou, Dutch Post Group, and Whitney Museum of American Art. Experimental Jetset taught at the Gerrit Rietveld Academie (Amsterdam) between 2000 and 2013, and are currently tutors at Werkplaats Typografie (Arnhem).

Presented by RMIT Design Hub Gallery in collaboration with the National Gallery of Victoria.

Thank you to the staff and the students from the Associate Degree in Professional Writing and Editing for their work on the Experimental Jetset – Superstructure newspaper:

Experimental Jetset – Superstructure explored the relationship between graphic language and the city and presented the first major survey exhibition of Amsterdam-based graphic design studio Experimental Jetset in Australia. A series of public programs were hosted to explore the exhibition’s ideas and themes along with contributions by local graphic design practitioners and researchers.