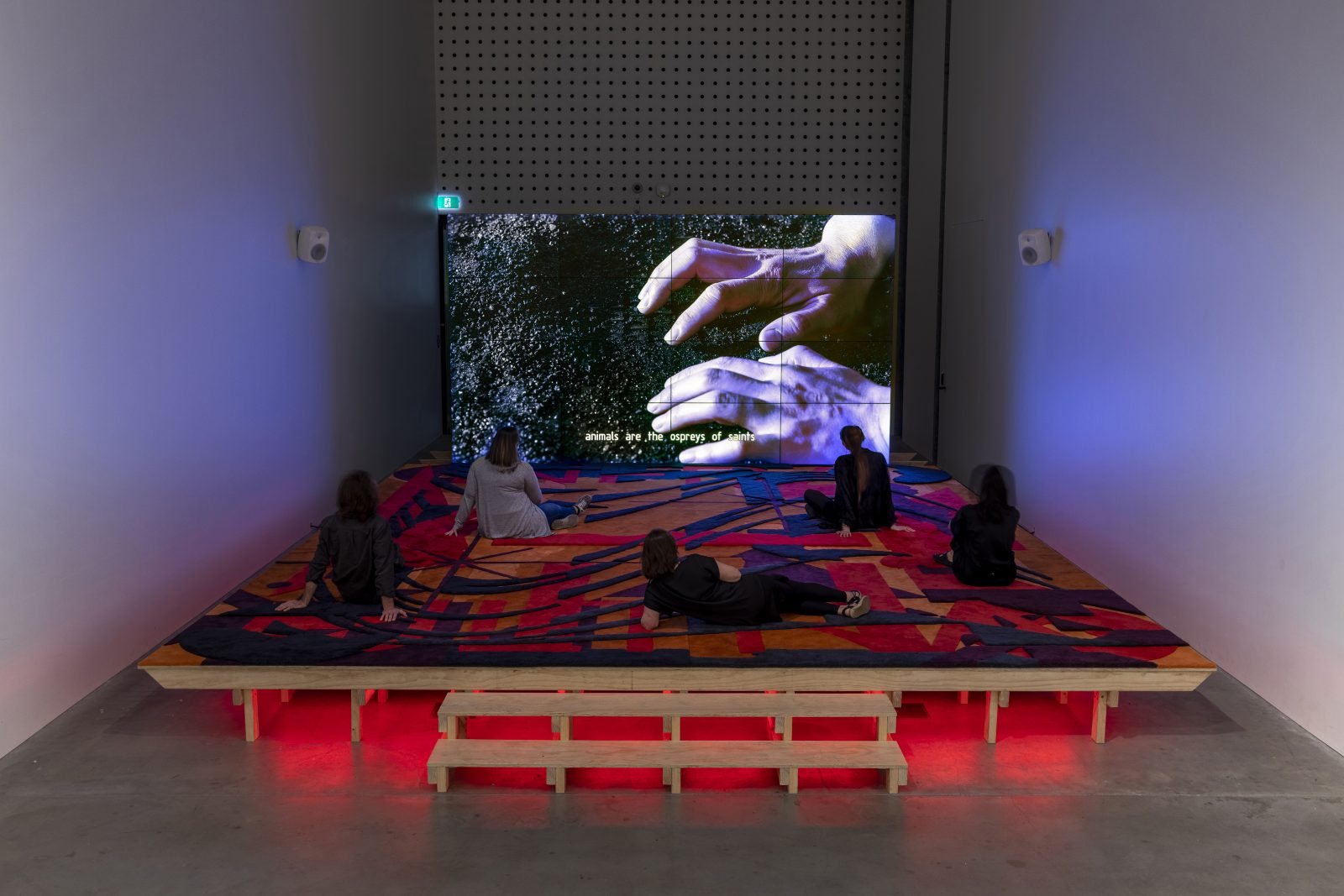 Metahaven: Field Report reflects upon today’s condition of information overload. Everybody has become a broadcaster, designer, filmmaker, prosecutor, judge, key witness, perpetrator and storyteller. This is not merely a political and social fact, but an aesthetic and cinematic regime. Propaganda is now a lived reality, necessitating novel forms of media literacy.

The exhibition features the inaugural presentation of major film and sound installation Eurasia (Questions on Happiness), 2018 in Australia. Eurasia is a cinematic assemblage of landscapes of the south-eastern Urals (Russia) and Macedonia built around a narrative of political fragmentation in Europe. Like much of Metahaven's previous work, Eurasia is itself a field report on the incongruencies of lived experience through digital media, in which the Eurasian steppe interjects with soft, heavenly nothingness — a space vast, tender, and forgiving, without dimension or aspect ratio.

The exhibition also presents Arrows, 2020, a series of tapestry works comprised of several parts that together form a larger megastructure or timeline. The work is reminiscent of timelines in film editing software such as Premiere, and is inspired by the arrow-shaped video playhead, which commonly symbolises linear temporal progress. Arrows I, II and III is one body of work within a series that engages with the notion of time. The tapestries materialise research from Metahaven’s book-length essay Digital Tarkovsky (Strelka Press, 2018), an exploration of Russian filmmaker Andrei Tarkovsky’s noted use of slow, long takes and their significance to the experience of time in the digital age. The tapestries look at the ways (historical) timelines are constructed and how, having become images, they contribute to our mental construction of long-term duration.

The work of Metahaven consists of filmmaking, writing, and design, and is united conceptually by interests in poetry, storytelling, propaganda, and digital superstructures. Films by Metahaven include The Sprawl (Propaganda about Propaganda) (2015), Information Skies (2016), Hometown (2018), Eurasia (Questions on Happiness) (2018), and Elektra (2019). Their work is frequently exhibited and published throughout the world. Recent solo exhibitions include Turnarounds at e-flux New York (2019), Version History at the ICA London (2018), and Earth at the Stedelijk Museum Amsterdam (2018). Recent screenings and group exhibitions include An evening with Metahaven MoMA, New York (2019), Ghost:2651, Bangkok (2018), the Sharjah Biennial (2017), and the Gwangju Biennale (2016). Recent publications by Metahaven include PSYOP (2018, edited with Karen Archey), and Digital Tarkovsky (2018).

The Melbourne Art Book Fair took place from Friday 13 March to Sunday 15 March at the National Gallery of Victoria.

Metahaven: Field Report is conceived and designed by Metahaven, Netherlands.

Metahaven: Field Report will be complemented by a series of public programs.

You can still enjoy Metahaven: Field Report from afar via our website and social media.