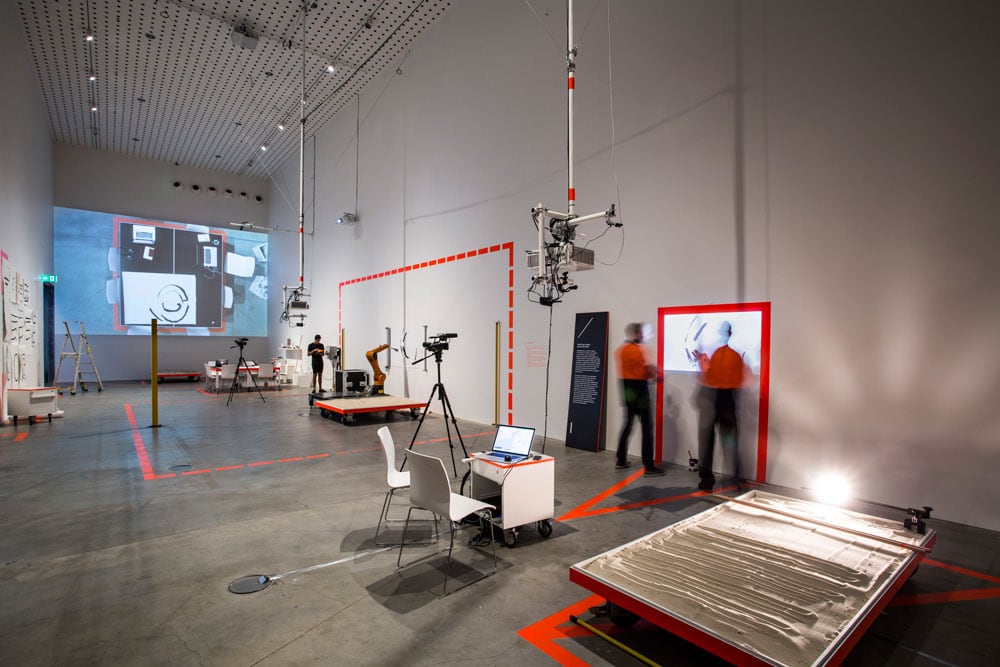 Technics & Touch: Body-Matter-Machine brought together practitioners Charles Anderson and Jondi Keane to test the limits of human and robot proficiencies. Through a series of experimental scenarios, the project aimed to explore methods of producing feedback systems through perception and action cycles. Working alongside a robot, Anderson & Keane constructed a laboratory space for programmers, performers and the public to interact; to make and to discuss approaches to embodied, expanded and autonomous intelligent systems.

The exhibition consisted of two parallel events: a laboratory space in Project Room 1, where the artists were 'in-residence', producing drawings in conjunction with the robot; and a procedural drawing exhibition in Project Room 2, where the outcomes of this human/non-human team were exhibited alongside the work of practitioners who have been exploring rule-based drawing for some time.

Engaging humans and robots in friendly competition, this exhibition found ways to pose questions to one another and expose what both can do well and what both can do better. One might imagine that humans excel at process adjustment, such as variation of touch relative to action already in-process and variation to another agent or material qualities. One might imagine a robot to have better precision and consistency in terms of the execution of lines in 2D and 3D space and the accurate repetition of those lines.

The tasks set for this project revealed how the human/robot interface might be managed to expand the capabilities of both systems and propose new outcomes that humans or robots cannot accomplish on their own.

The artists worked with the robot in Project Room 1 every Tuesday and Thursday, 1 - 4pm for the duration of the exhibition.

The artists worked with the robot in Project Room 1 every Tuesday and Thursday, 1 – 4pm.