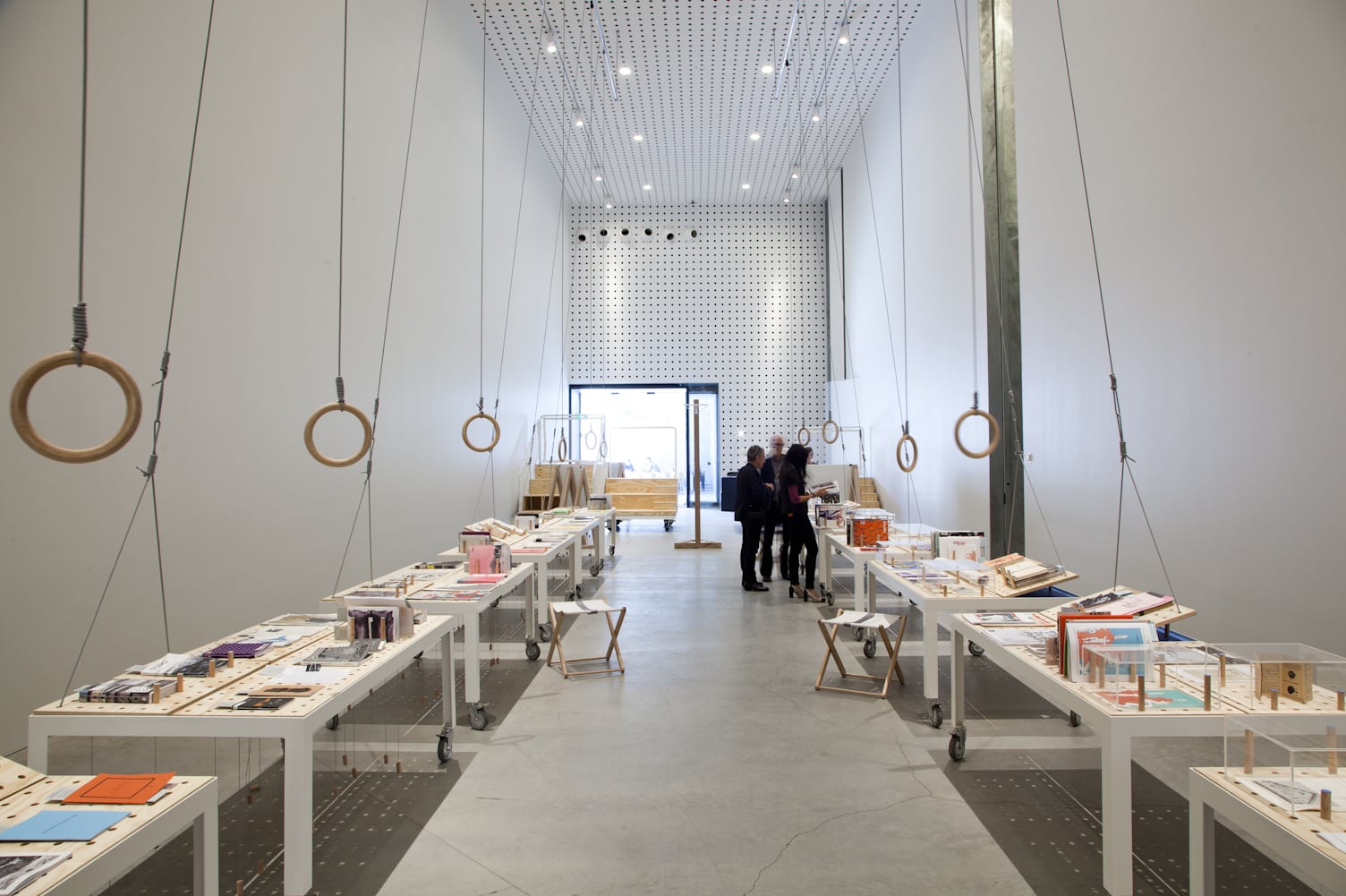 The celebration and interrogation of design publishing was the inaugural exhibition at RMIT Design Hub Gallery.

Designers have produced a phalanx of publications since the mid-twentieth century in the city of Melbourne. Public Offer aggregated these discussion platforms — zines, journals, blogs, apps, informal exchange circles, radio shows and podcasts — to look at how publishing has shaped conversations about the city and its design culture. Through this presentation (of fashion, architecture, industrial design, landscape architecture and graphic design), Public Offer prompted the questions: What do designers have to say? What can designers offer by being public?

The assembled material in Public Offer was unpacked through several voices — makers, publishers, critics, writers and readers — that became an additional guide. These personal narratives were accompanied by a program of public activities including sports, evening drinks, roundtables, coffee breaks, workshops, beamer presentations and talks that provided the social space that is vital for an exchange of ideas.

In considering both the past and the present field of design publishing, Public Offer and its host RMIT Design Hub Gallery sought to be part of a generous, critical community for design by creating a site for conversation, archiving and self-publishing. By exhibiting these publishing platforms, it shared some of the tools and topics designers use to engage with the public today, and its implications. By making a public offer, we declare our values as designers.

Public Offer was a program of activities, an exhibition, a library and a partner to the touring exhibition Archizines, curated by Elias Redstone, while in Melbourne at RMIT Design Hub.

Parlour is a website dedicated to questions of gender and equity in the architecture profession. One of its editors, Justine Clark, explains some principles behind its foundation and how a website can provide a platform for people to speak. Justine Clark is an architectural writer, curator and researcher. She is currently the editor of Parlour: women, architecture, equity.
Click here for the audio file

Architecture Australia has gone through many editors, styles and tones but remains a constant presence in Australia's publishing history, having been established in 1904. Former editor Justine Clark reflects on her experience steering the magazine.
Click here for the audio file

The current fashion blog and tumblr roll of Melbourne mixes aspirations and wardrobes to feed the public a cacophony of images. Here, Ricarda Bigolin contrasts popular international blogs (Style Bubble, Garbage Dress, Sea of Shoes) with local examples (Foxyman, Style Standards, Sea of Ghosts) to ponder what the future of fashion publishing could be? She asks: What is the potential of Melbourne's "outsider" position in the global fashion scene? Ricarda Bigolin is a fashion designer, lecturer in RMIT's fashion program and part of art group Dolci and Kabana.
Click here for the audio file

Robyn Healy reflects on the representation of the fashion scene within design publications from the 1980s until today. She began by recounting an image of Yohji Yamamoto's clothing she saw in Crowd magazine, which represented a moment where international and Melbourne culture converged. Robyn Healy is the Head of School for the School of Fashion and Textiles, and a major contributor to the independent fashion scene in Melbourne and beyond.
Click here for the audio file

Is Not Magazine was a poster format cultural magazine that was pasted and pinned on Melbourne walls between 2005 and 2008. Each issue was themed by two-related words; for instance, Love (Is Not) Lust, Habit (Is Not) Addiction, Seeing (Is Not) Believing. A constant in its presence, however, was the exclusive use of fonts created by the European typographic design studio Underware. One of the founding five members, Penny Modra, recounts the aspirations of the publication, and an adoring blonde adonis fanboy. Penny Modra is the editor of online cultural magazine Three Thousand, and the editorial director of the Thousands City Guides. She was a founding editor of Is Not Magazine.
Click here for the audio file

Tucked away in laneway bar called Loop, Process is a talk series organised by young architects (and supported by the Australian Institute of Architects) to discuss projects on the drawing board and issues related to practice. Its first night in 2006 had architects present projects "that went pear-shaped" as a reaction to the prevalence of glossy architectural "hero" images and "hero" stories. Founding member Simon Knott details the origins of the talk series as a way to build on the history on Melbourne's rich architectural conversation through engaging younger architects. Simon Knott is an architect, broadcaster and educator. He currently hosts radio show 'The Architects' on 3RRR, teaches at RMIT University, and is a partner at BKK Architects.
Click here for the audio file

Ampersand was a magazine self-published and run entirely by Stephen Banham between 1991 and 1996. The magazine was based on exploring the effect typography has on place, and an attempt to provide an Australian voice on the matter. Each issue focused on a singular question relating to typography. Stephen Banham is a typographer, writer, lecturer and founder of Letterbox, a typographic studio. He created Ampersand, Qwerty and many others publications.
Click here for the audio file

Qwerty aimed to address the idea that graphic design students were looking to overseas resources, by providing an Australian voice. It was a self-published magazine produced entirely by Stephen Banham.

Michael Trudgeon from Crowd Productions talks about working on the graphic design of four Melbourne publications over the period of a decade. He began by talking about Transition, a non-profit, independent architectural publication. Michael Trudgeon is an architect, industrial designer, and founder of Crowd Productions. He was involved in the content and production of several magazines, including: Fast Forward, Crowd, Architecture Australia, The Interior and Craft, among others.

Crowd was a design and culture magazine that had a network that extended across Australia, Europe, the US and Japan in the mid-1980s. At its peak, it sold as many copies as The Face in Australia.

Fast Forward was a cassette tape magazine published between 1979 and 1982. The designer of Fast Forward, Michael Trudgeon speaks about the origins of the magazine as a way to spread music beyond the written word and before the internet.