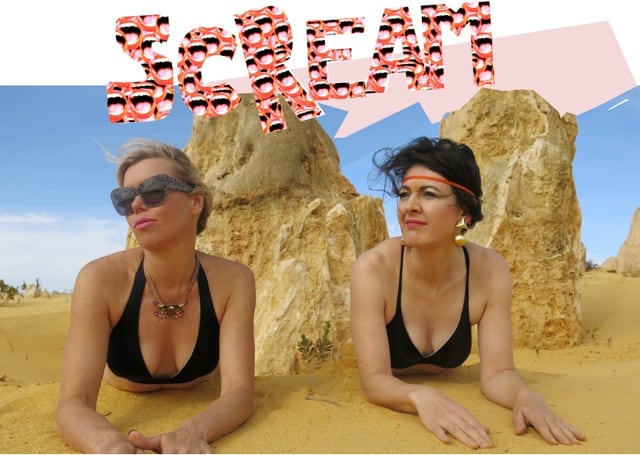 RMIT Design Hub Gallery was pleased to announce a major exhibition by Australian/European artists Chicks on Speed (Alex Murray-Leslie and Melissa Logan). SCREAM introduced a multidisciplinary, practice based approach to performance research, blurring the boundaries between pop-music, fashion, performance and film within an experiential interactive installation or GESAMTKUNSTWERK (a total work of art).   SCREAM saw the Design Hub Gallery dramatically transformed by Chicks on Speed’s explosive collage of images, sounds and objects. The artists constructed a sonic sculptural installation that also acted as an ‘objektinstrument’ (a self-made musical instrument) - a stage, a canvas and playable installation.  SCREAM questioned the role of the audience, by empowering the public with tools to participate in Chicks on Speed's collective jam session. SCREAM's interactive nature gave rise to several possible outcomes for the artworks, allowing the audience to be 'co-authors' in the mix (Candy, 2011).

SCREAM introduced a series of six interactive iPad Apps as new instruments for musical expression invented by Melissa Logan & Alex Murray-Leslie in conjunction with ZKM Centre for Art and Media, Karlsruhe, technologist Jens Barth, with support by Melbourne based sound designer Benjamin Walbrook. The Chicks on Speed fashion film vs music video UTOPIA made at Artspace and MCA, Sydney, was presented in the Design Archive window for 24 hours a day, 7 days a week. The video featured Melbourne based dance troupe The Lycra Ladies and Billy Lime. A series of collateral events accompanied the exhibition, including a  workshop, Live Art Performance with collaborators including Erica Lewis, Lycra Ladies, Billy Lime and RMIT students, and the premiere of Chicks on Speed's remake of the Luis Buñuel Film, L'Age D'or.

Collaborating for over fifteen years, Chicks on Speed have worked with performers, artists and musicians including Yoko Ono, Peaches, Karl Lagerfeld and Douglas Gordon (among many others).  Chicks on Speed have performed at major festivals around the world, released numerous pop albums including celebrated tracks such as ‘GLAMOUR GIRL’, ‘We Don’t Play Guitars’ and ‘Art Dump’ and exhibited and performed globally at key cultural institutions. Chicks on Speed opened the 2013 Australian Pavilion at the 55th Venice Biennale, the group has participated in major solo and group exhibitions at Thyssen Bornemisza Art Contemporary 21, Centre Pompidou, Paris, Tate Modern, London and MoMA, New York. SCREAM was a joint project between ZKM, Artspace and RMIT Design Hub Gallery. The group released the six iPad Apps and full length album SCREAM to coincide with the exhibition, released on Chicks on Speed records and digitally in March, 2014.

Bearing the sharp weapons of Pop, subversion and cheekiness Melissa Logan & Alex Murray-Leslie declare war on gatekeepers of a market-enslaved art. And thank the generosity of the individuals and institutes who have made SCREAM possible. The funding of culture is too often seen as a luxury when culture is what allows dreams.  Imagination is a matter of development and everything made has been imagined first.

SCREAM is a joint project between Artspace and RMIT Design Hub Gallery.

Special thanks to Boom Studios for their expert vinyl and image printing.


The Age – In the Galleries

The Age – Shape Designs for Life

Professor Margaret Gardner AO, Vice-Chancellor and President RMIT University, is delighted to invite you to the opening of the exhibition Chicks on Speed: Scream.

Please join the artists and Design Hub Gallery team for the closing celebration of Chicks on Speed: SCREAM on Tuesday 4 March!

PERFORMANCE
7pm, RMIT Design Hub Gallery
A live media-art performance with students from the School of Fashion
and Textiles and the School of Media and Communications.