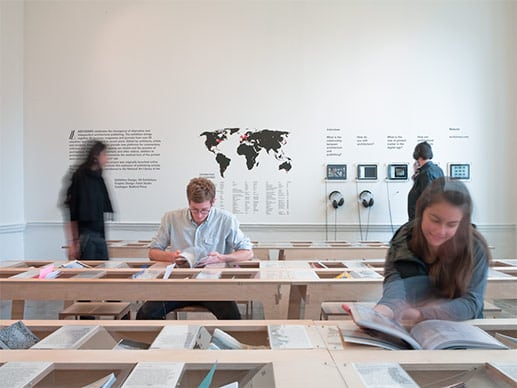 Archizines celebrated the resurgence of alternative and independent architectural publishing around the world. The touring exhibition, curated by Elias Redstone and initiated in collaboration with the architectural association, featured 90 architecture magazines, fanzines and journals from over twenty countries that provided an alternative to the established architectural press. Edited by architects, artists and students, these publications provided new platforms for commentary, criticism and research into the spaces we inhabit and the practice of architecture. They make an important and often radical addition to architectural discourse and demonstrate a residual love for print matter in the digital age.

The exhibition featured titles from the collection alongside video interviews with their creators. Each publication had selected one issue to represent their approach to publishing and they were all available for visitors to read. The Melbourne version of Archizines was the biggest yet, including new and more recent publication additions such as POST from Melbourne, FAKE CITIES / TRUE STORIES from Bratislava, Proposals from Helsinki, and the archive of Intuitive Structures from Berlin. The original Archizines collection was transferred to the National art Library at the Victoria and Albert Museum, London.

February 18 – 22
The Weather Ring in residence